Shares of power producers plunged amid fears over a windfall tax on wind and solar companies.

The government is expected this week to unveil legislation imposing a revenue cap on renewable energy producers after talks between ministers and the sector failed.

The companies oppose this decision.

They are thought to be willing to accept a tax on profits, but reject a cap on revenues that could not be offset by future investments – a benefit controversially enjoyed by oil and gas companies.

EDF Energy, RWE and Scottish Power could also be involved if the measure is introduced.

The move would mark a sea change in policy given that Liz Truss rejected such a windfall tax at the Conservative Party conference.

Earlier this year, on the campaign trail in Leeds, she told voters: ‘I don’t believe in windfall taxes because they delay future investment.’

“The government seeking to unilaterally impose a revenue cap on renewable generators is akin to the referee going out for the second half with a different ball because one side didn’t like the score at halftime,” said Investec analyst Martin Young. 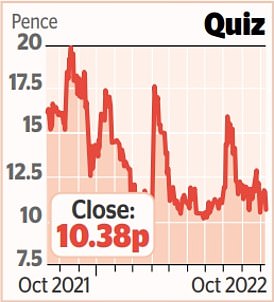 Shares of Quiz fell after warning that uncertainty over the cost of living crisis could impact demand for its flashy wearables.

The Glasgow-based fashion retailer said “it remains uncertain what impact the current cost of living pressures will have”.

That overshadowed an otherwise positive update. Quiz, which has 62 stores in the UK, saw a 37.2% rise in sales to £49.4million in the six months to September.

Meanwhile, Credit Suisse analysts said Drax was “most exposed” to such a policy, adding: “The government has no fiscal alternative but to take the big economic profit from the generators.” And companies would have much less control over a revenue cap.

AJ Bell chief investment officer Russ Mold said: ‘There are fears this could deter investment in new renewable energy projects, which in turn reduces opportunities for energy companies to make additional profits. in the future, which does not please investors. ‘

Trying to restore calm to the markets seemed to be one of the government’s priorities.

Chancellor Kwasi Kwarteng has brought forward the date of his financial statement, from October 31 to November 23, as he seeks to shed light on how he will pay for his billion-pound tax cut package while reducing debt.

Independent OBR forecasts will also be released at the end of October.

At the top level, DS Smith jumped 12.1%, or 29.3p, to 271.1p after raising its forecast. The packaging group now expects to make a profit of at least £400million for the six months to the end of October.

This means that DS Smith’s performance for the year should be above previous expectations, although DS Smith experienced a slight decline in corrugated box volumes.

There was also good news for M&G investors after its boss and chairman together took nearly £460,000 worth of shares.

Some links in this article may be affiliate links. If you click on it, we may earn a small commission. This helps us fund This Is Money and keep it free to use. We do not write articles to promote products. We do not allow any business relationship to affect our editorial independence.